“This is the heart of the American idea…” the radio croons. “One of my favorites is actually President Reagan . . . that’s the America that I know and love and believe so many of us want to belong to.” Trump’s not looking back to the 50s; he’s thinking of the 80s, when coke was queen and Letterman king. Trump’s interviews on late-night and day-time TV, and stories about him in the New York Post are more revealing than the Pussy-grabbing tape. Like the latter, they narrate the core issue: we’re not dealing with an ordinary human, folks. Trump’s the most advanced form of celebrity ever to occupy the Presidency. He’s a virtual entity that’s temporarily assumed human form. Celebrity, when regarded, as Cintra Wilson does, as a “grotesque crippling disease,” consumes the brains and bodies of those in inhabits. Many celebrities kill themselves, others die from too many pain-killers, or go insane. Trump’s madness is a symptom of 35 years of getting himself on TV. 15 minutes just isn’t enough for some of us; twice 15 years isn’t enough for a narcissistic (homicidal) few.

Trump isn’t the first celebrity President, of course. But he’s way up there.

President Trump hung a portrait of Andrew Jackson in the Oval Office on Tuesday, The New York Times reports, an apparent nod to the populist sentiments of the new administration.

Trump’s rise has often been compared to the populist election of Jackson, including by some of the new president’s own team. 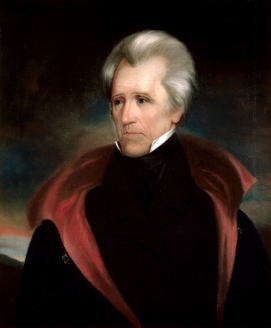 Bannon’s Jackson is the patriot who put Indians in their place (several thousand miles away) and opposed the central bank. Breitbart reports that

Jackson did all this while accomplishing something almost equally rare in the advancement of nations: he intentionally decentralized the government, vetoing wasteful infrastructure projects and sending them back to the states where they belonged.

Sounds like he approved the contemporary Republican opposition to Obamacare. As Raymond Williams observed, traditions unfold backwards in time; they are made in the present. Lacking this present reconstruction, that fail to exist in the present, therefore fail to be active traditions. Trump is not resuscitating ancient verities. I suspect that his Jackson is someone else, someone more “present-tense”: our first celebrity President. He would appreciate the simultaneous rise in fame and power exhibited by that half-literate land-speculator and militia leader who parlayed his spectacular victory in New Orleans into public office.

Teddy Roosevelt and Eisenhower did the same. But Reagan was Jacksonian in a new way. He wasn’t in the war, exactly, although he filmed the hell out of it; it was B-movies and cigarette commercials that put him before the public eye.

A culture-industry celebrity who parlayed his status in the virtual nation (plus strong ties to the anti-communist unions, later the Christian Right) into public office.

Trump outdid them both. His ability to catapult from Reality TV to within Electoral Advantage of the Presidency should tells us something about our relation to televised drama. 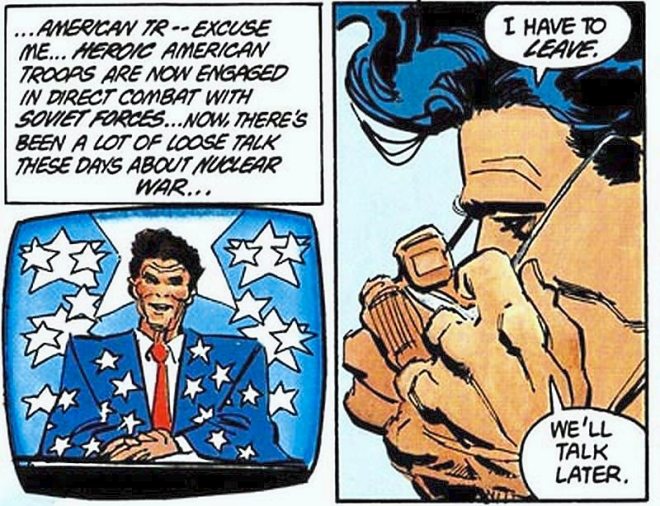 In Frank Miller’s Batman: The Dark Knight Returns, Superman responds to Reagan’s warning. Trump regards himself as such a man.

Like other Bolsheviks, he became commonly known by one of his revolutionary noms de guerre, of which “Stalin” was only the last. “Stalin” is based on the Russian word сталь stal, meaning “steel”, and the name as a whole is supposed to mean “man of steel”.[344] Prior nicknames included “Koba”, “Soselo”, “Ivanov” and many others.[345]

In bridge, that game of the New York elite since the Gilded Age (Dummies.com),

I am a writer and editor, artist and activist. I live in Rogers Park, Chicago. View all posts by matthiasregan

This site uses Akismet to reduce spam. Learn how your comment data is processed.